The origin of bags came from the lack of pockets in clothes. Therefore, people needed a secure place to keep their personal effects, and thus, resorted to bags.

As business became farther away than one's shop or home, white-collar professionals required the means to convey their personal effects and valuables to the office. The only practical solution was to adopt the use of bags, and in no time, the briefcase was born. Since then, briefcases have dominated for housing documents in the business world.

Interestingly, briefcases became the mainstream fashion among the elite and working class going to the office. Lawyers also used them to carry briefs which led to deriving the name briefcase. Now a necessity, professionals and working-class individuals, in different fields, use them to move files around.

But, as you will see as you read along, many now prefer the smart-looking and more functional leather briefcase bags to the original standard box design.

Let's walk through the changes briefcases have undergone to make it to their present state.

Briefcases weren’t only a more professional and practical solution to organizing and carrying papers around. They were a workplace formality and the symbol of the corporate man.

The first briefcases originated from goat and calf hide, which housed workers’ documents, papers, clergy members’ Bibles, and other valuables. Even school kids were not exempt as they carried satchels to school.

Soon after, bags began going through reforms from drawstring bags to leather satchels until pockets emerged in the 17th century.

Eventually, there came the Letter cases, Gladstone bags, the Shoulder bag used by soldiers, and soon after, carrier bags which became popular among doctors and lawyers. These bags had a common closing pattern, either using keys to lock them or combination locks.

Towards the 60s and 70s, briefcases evolved to a square-like shape, built around wooden frames and covered in leather. These bulky box-looking cases were rigid, with handles and hinges on the opposite sides. They were made from sturdy leather and often had a lining and an inner divider to hold little things like a pen or paperclips.

The cases were more of large internal spaces, swallowing everything at a go, and without enough sections. Then, designers tried to fashionize them making hot-looking aluminum retro briefcases, and vintage leather briefcases. But, they were still the square box design with very little pocket space, and requiring items to lie flat. 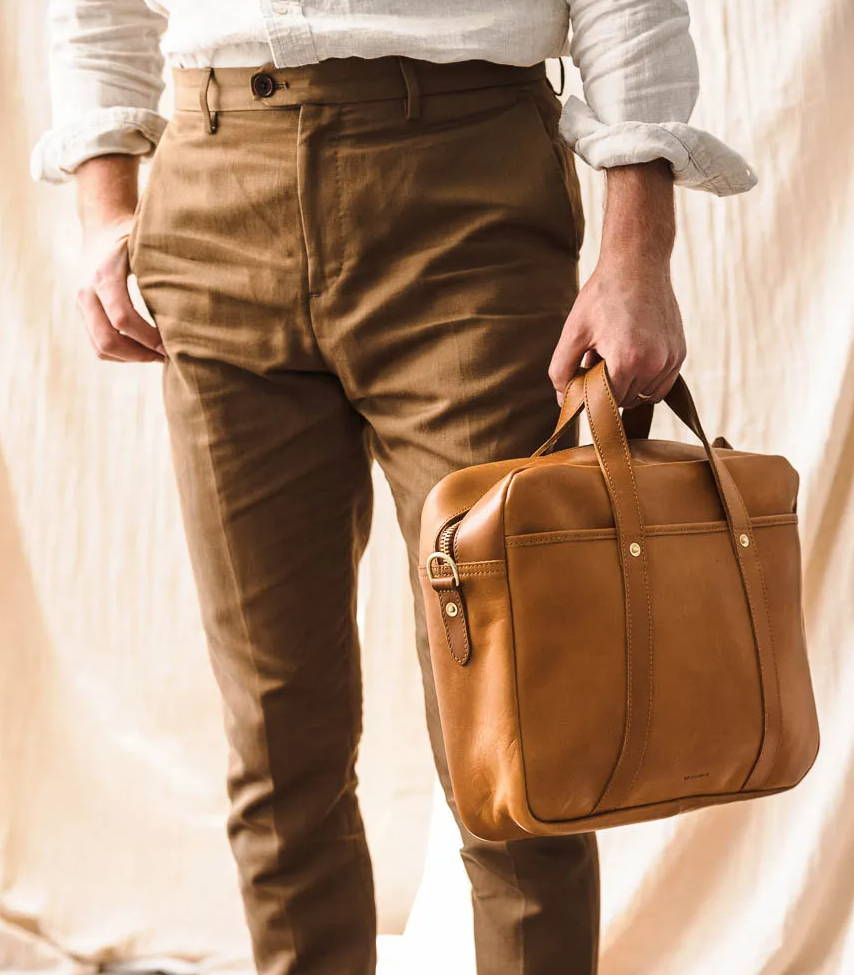 As time passed, the square briefcases began to fizzle out as style changes emerged, and their users aged.

The younger demographic looked away, and sought more befitting and stylish leather briefcase bags to make a personal statement.

Soon after, this bulky classic briefcase was not as popular.

How we do business has continued to evolve as far as the use and function of briefcases. Indeed, the ever-changing corporate world seems to align with them. Events took another turn sometime in the late 80s with the advent of technology. Sleeker, more versatile, and functional leather briefcases began to surface, and people quickly adopted them.

The key difference between modern cases and their predecessors is that they are equipped with add-ons and pockets to help organize and keep documents or office materials in sections. It became a more efficient and more realistic way of managing things. Individuals needed space for calculators, maybe their wallets, and anything else from the office required when visiting a client.

Since then, big fashion names have begun to develop and manufacture slimmer, fanciful, and fashionable cases to fit the recent technological trends. Moreover, professionals no longer carry heavy books and documents since kindles, laptops, and even smaller devices like tablets and flashdrives have replaced them. 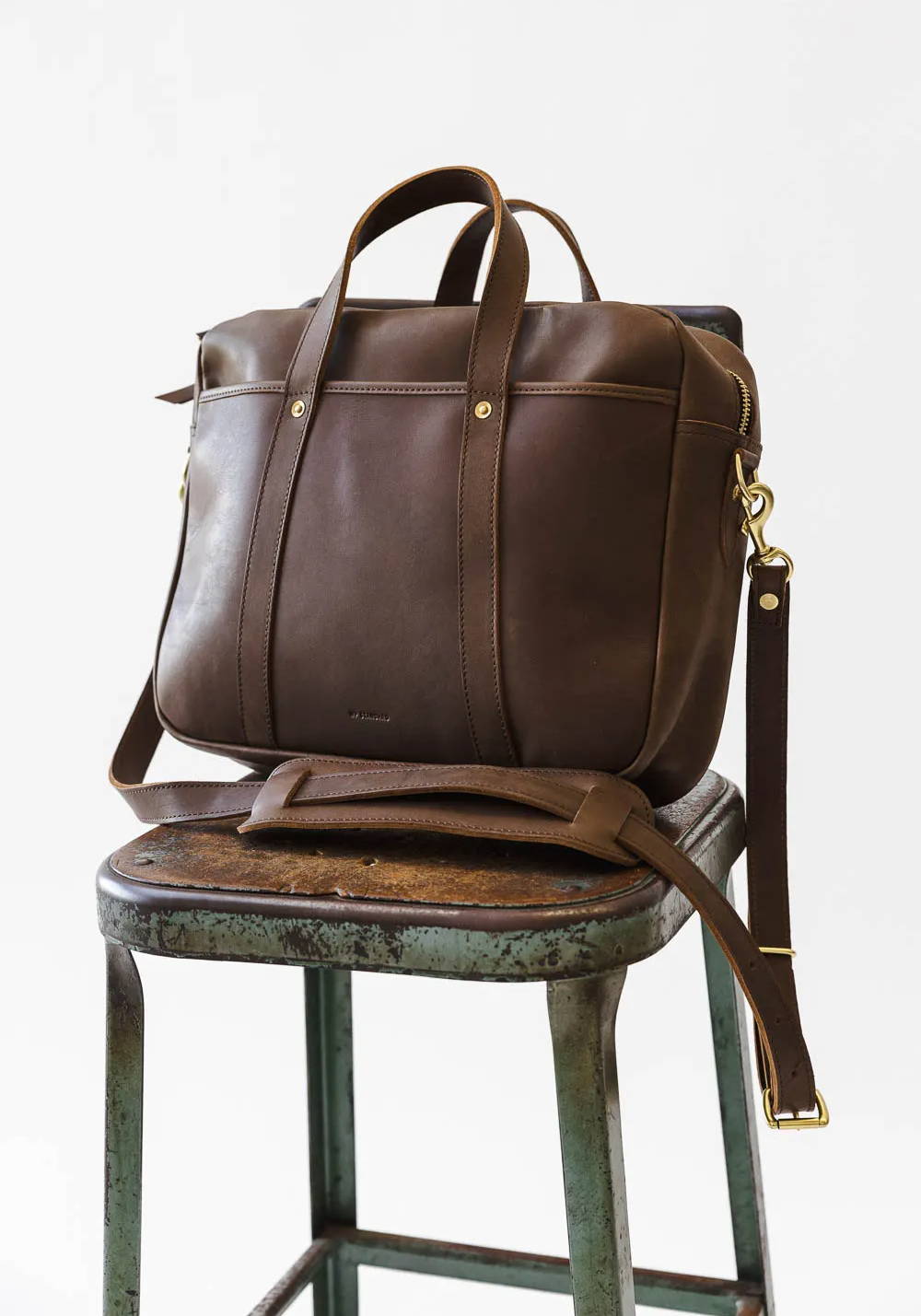 Today, people are traveling light, and slimmer cases favor that. Nobody wants to lug heavy cases around everyday, especially when dealing with narrow spaces on the bus or subway.

So, it’s an easy choice between traveling light or dragging a large box around. This has given rise to slimmer, fanciful, and more trendy options to match personal styles. Of course, executives need stylish items to go along, and modern briefcases do just that, favoring fashion and a simplistic lifestyle.

In the past, suit-clad professionals completed their look with the classic, standard square box cases, as it was a staple for every corporate person, lawyer, and even many doctors.

Nowadays, the briefcase is no longer the sole purview of professional people. The story has changed, and briefcases have evolved from not only being functional to becoming a fashion statement with so many diverse individuals carrying leather briefcase bags.

The trends have shifted from the old standard square box that was mainly a suitable internal space with a handle to sleek leather bags with multiple pockets, and inside and outside space geared to today's technology. In other words, lots of little areas for charging cords, portable harddrives, phones, laptops, and the like.

There are also other features such as shoulder straps should you prefer to carry the briefcase on your shoulder or slung over the body, cross-bdy wise. Convenient carrying handles allow you to hold the bag in your hands if you prefer that way.

Some have zippers on the top and others have closure straps on the front like the old telegram messenger delivery style bag.

The truth is today's briefcase is quite versatile. Made from leather, fabric, vinyl, and canvas, there is shortage of selection.

But to be honest, we think leather cases win over others because they’re durable, easy to work with, and have an exciting appearance. They stay looking nice and last for a long time. Make your bag look great forever by following our care tips.

Dress codes are also evolving, specifically, less formal than in the past, which means leather briefcase bags can be a strict and proper as you require, or fun and fanciful for occasions that are not work related.

In the old days, it would have been a little off carrying the square box briefcase to an overnight stay. But today's briefcases double as traveling bags, and easily hold a few items of clothing, and some toiletries. In fact, many individuals now love them as carry on bags when flying or basically taking any form of transportation. 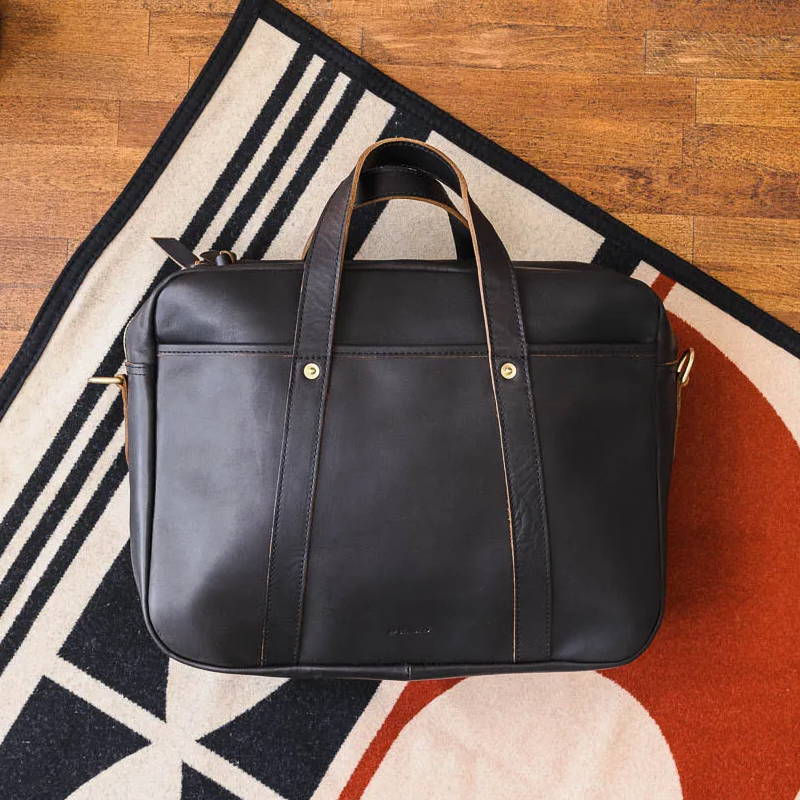 Some practical, yet snazzy upsides are more modern designs and brilliant color combinations to match the evolving styles in clothing.

Briefcases still appear in shades that harmonize with business clothing, but also, look great with a tshirt and jeans, or a summer dress.

Also, it’s evident that the up-to-date types do a much better job of equally distributing weight and saving your arm and shoulder from pain. Plus, having a bag that you can carry over the body keeps your hands free for other activities such as scanning a credit card or grabbing a ticket from the machine.

Likewise, you don't have to set your bag down on the dirty floor like you did with traditional briefcases. This keeps it germ-free, and potentially less appealing to thieves.

Although there are regular shifts in trends, professionals, students, and everyone in between will continue to transport their materials and belongings in briefcases.

It doesn’t matter if the oldie but goodie bulky box style with handles comes back or not, there will always be more stylish ones in the design process. They will be lightweight with more compartments and will adapt to not only fashion trends, but also technological changes.

There is no doubt that the current uptick in leather briefcase bags usage is not a fad or fleeting moment. It is here to stay, and plenty of people of all ages are using them for varied purposes. Ease of use, smart looking with all types of clothing, and certainly durability are all hallmarks of beautiful leather.